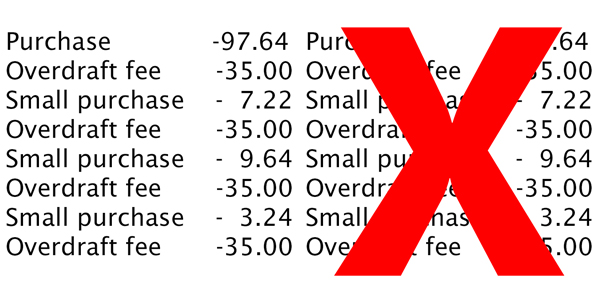 Has this every happened to you? Getting charged an overdraft fee that’s higher than the purchase itself? Or getting charged multiple overdraft fees because even though you had the money in the account when you used your debit card for a small purchase, that purchase stayed pending for a few days until a larger payment came out and now you have multiple overdraft fees that are more money than the purchases themselves. It’s completely unfair and worse than what even a loan shark would charge you. It’s legal robbery by the banks.

When I used to work for one of the largest banks in the world as a financial adviser, I found out that the PnL for a bank account that had 6 figures in a checking account earning a low or no interest, is less than the client who has a few hundred in the account, with direct deposit, and a credit card with a balance of a couple of thousand dollars. The bank makes more money off of the people that have none. One of the main reasons for that is overdraft fees. I didn’t handle personal banking as I only dealt with investments, but there were plenty of customers that were very upset and rightfully so.

In New York State we have laws against payday loans which take advantage of people with enormous interest. These overdraft fees are often at a higher interest than what payday loans are charging, and the banks are disguising them by calling them fees. If you paid a $35 fee for over drafting by $10 and then had your direct deposit make it current by the next day, then you paid a 350% interest for 1 day which is the equivalent of a 127,750% APR. This is not the same as bouncing a check. The money from pending transactions is already taken out of the available balance and yet they charge people multiple overdraft fees for money they took out already because they leave it as pending. They know what they’re doing and they’re ripping people off and it shouldn’t be legal. If I’m elected, I’m going to fight to make sure that they are adjusted to something that is more fair. Just because it’s legal, doesn’t mean that it’s fair and nor does it mean that it should be legal.

I hope that you’ll support my campaign with a donation. Maybe a donation of $35.00 to help fight these unfair $35.00 fees. If the bank legally stole your money already and you can’t donate, then you can still help by getting the word out by sharing my website so others can support in any way that they can. Thank you.